On Friday, November 23 Powering Potential hosted a conference and lunch for heads of schools where our program is implemented. We also invited district officials but they were busy managing national tests which are happening now in Tanzania.

The conference was helpful to them and us. We got very useful feedback and the heads of the schools got a chance to connect with each other and share their questions, comments and suggestions. This is something I would like to do twice a year. 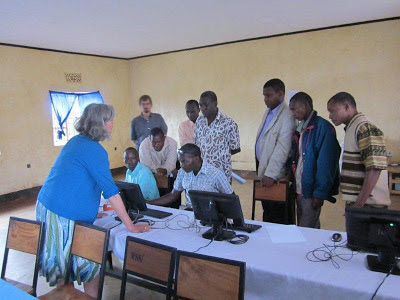 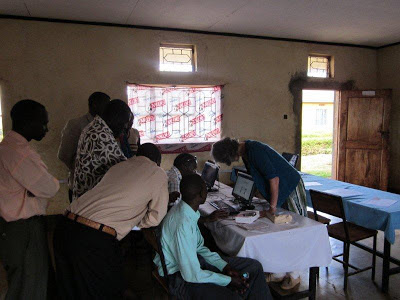 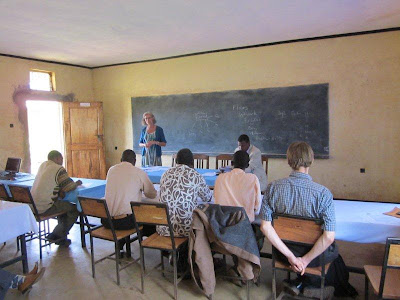 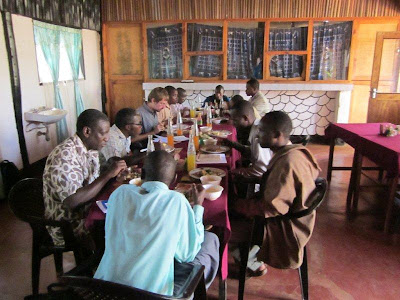 Powering Potential needs an office/storage room/test lab space in Karatu. I lovingly refer to this future space as our International Headquarters  🙂

The lodge where I always stay in Karatu (Crater Rim View Inn) is building a room on their grounds and I have spoken to the owner about the possibility of renting it from him.

Below is Powering Potential’s International Headquarters (in my mind) taking shape. It’s small, as Albin and Elibariki observe, but it’s bigger than what we have now, as I point out. 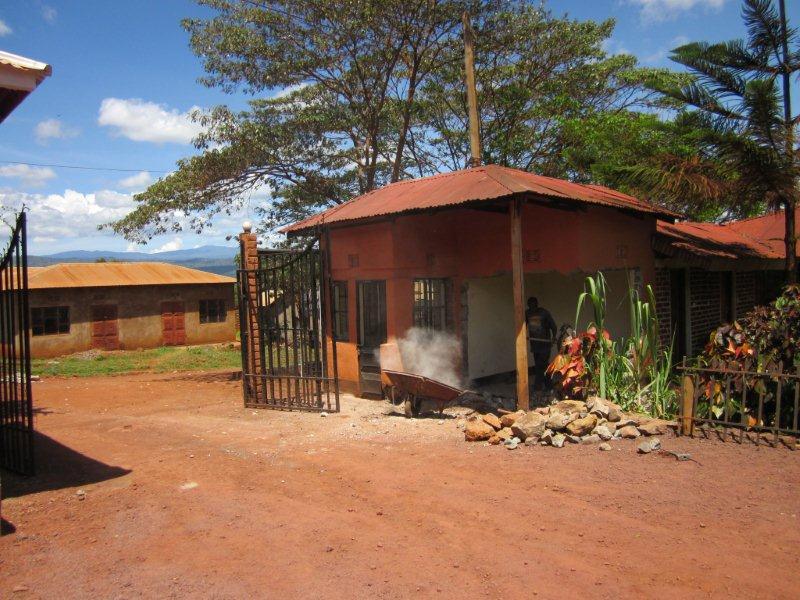 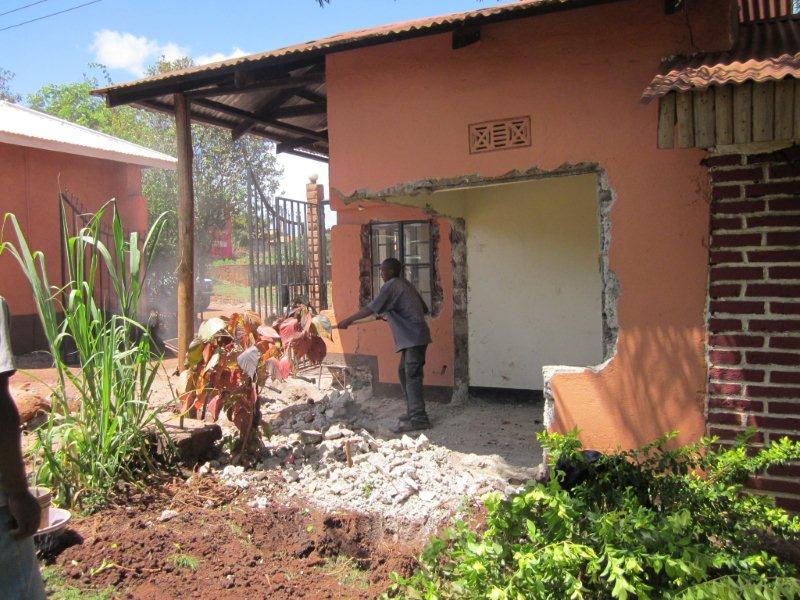 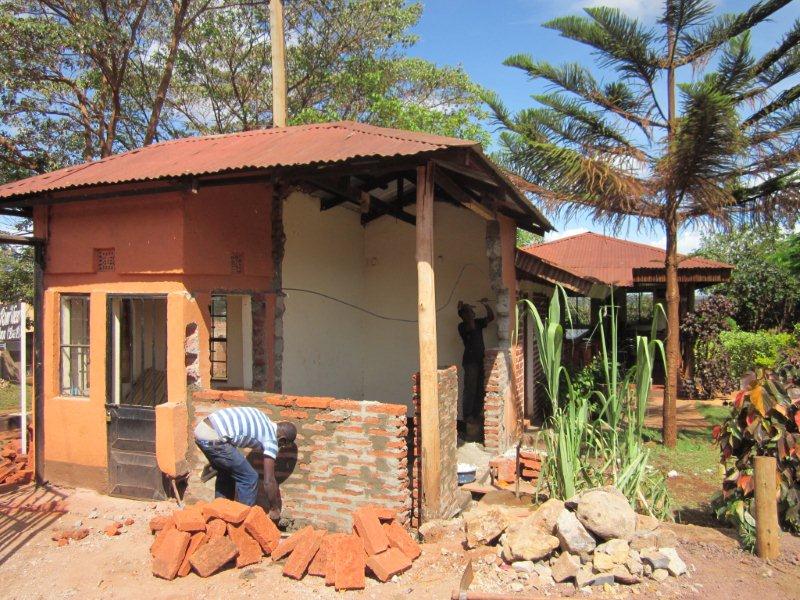 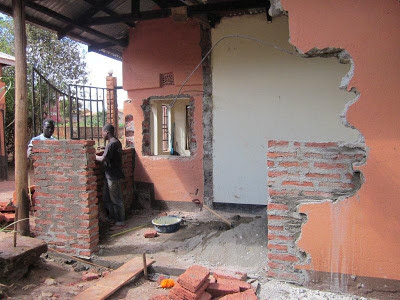 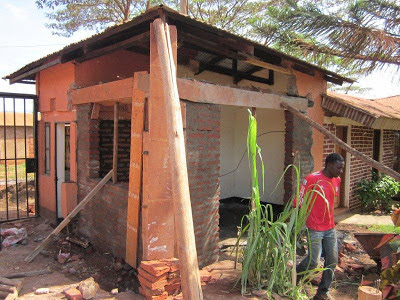 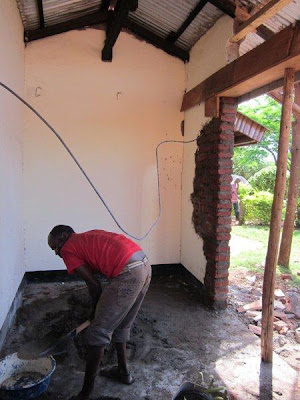 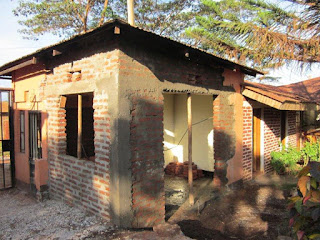 By the way, we do already have a post office box in Karatu. It will be useful when I need to send over supplies. Elibariki, our Karatu representative, checks the box periodically but so far no mail has arrived. If you would like to give him a surprise he would love, send a letter or card to:

Milton Finger, the Director of International Programs for the Livermore, California Rotary Club joined me (Janice Lathen, Founding Executive Director of Powering Potential) on this trip to Tanzania. He is committed to securing a Rotary International grant to expand our program. He wanted to see firsthand our work and meet local Rotarians and government officials.

We meet with Rotarians in Arusha town, and in Karatu town I arranged for him to meet with Mr. Berege the Karatu District Executive Director. (Tanzania is divided, from large to small, into regions, districts, cities, towns, and villages. Karatu is the name of a district and a town, and Arusha is the name of a region, a district and a town. So to distinguish, people say Karatu or Arusha town if they mean the town not the region or the district 🙂

Mr. Finger wanted a letter from district officials confirming the need for computers and stating their commitment to maintaining the program. In preparation for that meeting, I gave Mr. Finger’s Rotary proposal to Mr. Godfrey Marisham and invited him to view our program. Mr. Marisham is the Assistant Education Officer – Karatu District Council and the Ministry of Education’s representative in Karatu; he advises the District Executive Director on education matters.

Below are photos of Mr. Marisham’s visit to view our program at Welwel Secondary School on November 10. He is accompanied (left to right) by Severine Herman, Elibariki Magnus and Albin Mathias – Powering Potential’s Welwel school trainer, Karatu Representative and Country Director respectfully; they explained our program to Mr. Marisham and answered all of his questions. 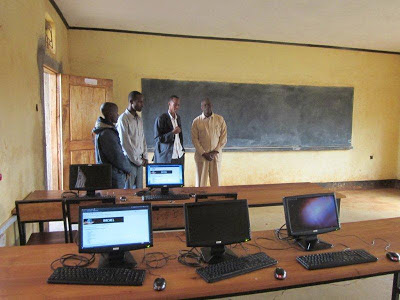 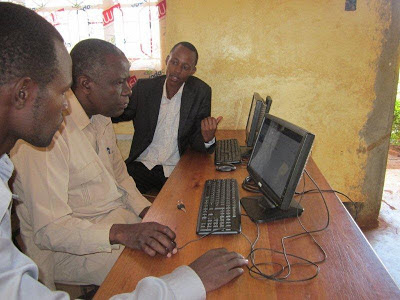 On Monday November 12 before our meeting with district officials, Mr. Finger and his companion, Eileen Velen, and I also visited Welwel school. Below Mr. Finger is watching a Khan Academy video from RACHEL on Moles and Avogadro Numbers. There are more than one kind of moles 🙂  this one has something to do with chemistry. Mr. Finger is a highly respected chemist. 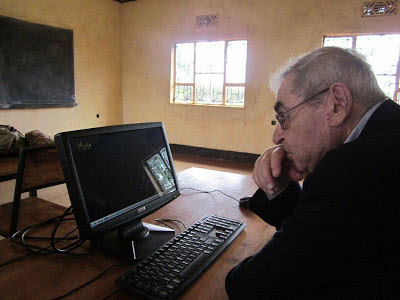 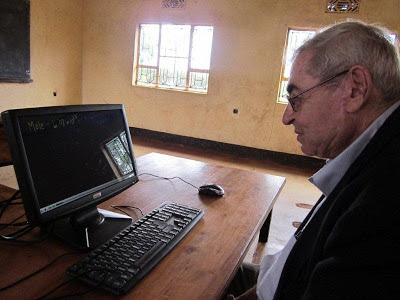 Mr. Finger, Eileen and I also visited Banjika Secondary School (see photo below). Milt and Eileen were somewhat surprised to see how inexperienced the students were with computers. For those of us from more developed countries it is hard to imagine that there are people in this world who have never even seen a computer. These beginning students were learning how to hold a mouse, point, click….think back to when you were first introduced to a computer… 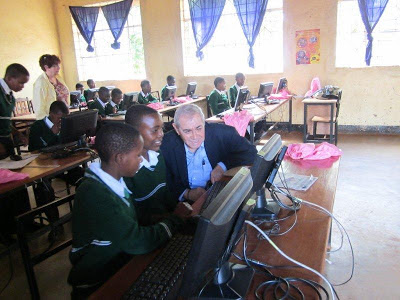 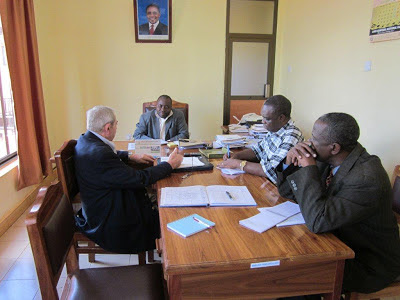 Below are Albin and Elibariki on a beloved motorcycle leaving Welwel school. I am always asking them to PLEASE wear helmets. I want these guys alive 🙂 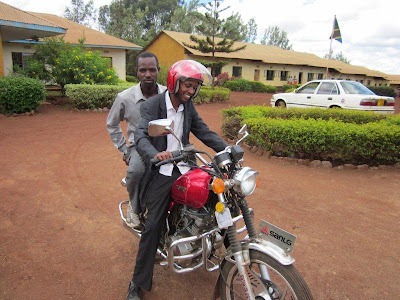 And Milt, Eileen and I at the Ngorongoro Farmhouse, the Kibo Safari Lodge where Milt and Eileen were staying: 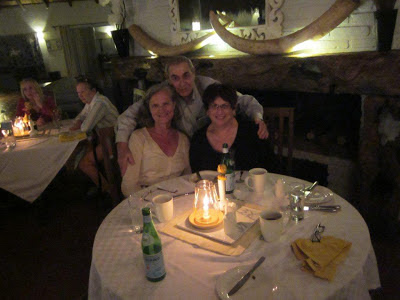 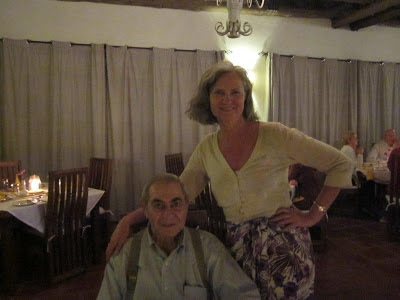 I love to read your comments on my blogs….they inspire me and I need inspiration.

The students and teachers of Baray, Slahamo and Endala Secondary Schools in Karatu District of Tanzania now have access to modern educational tools (computers). Many of these young people had never even seen a computer before Powering Potential implemented its program in October 2012.

Powering Potential with our Educating-Through-Technology program has installed at each school, five computers, a solar power system to run them, and is funding two technology trainers for three months at each school.

A hallmark of our program is the RACHEL educational content from worldpossible.org. This content provides a wealth of current knowledge to the students and teachers – selected wikipedia sections, math and science teaching videos, medical reference books, ebooks from Project Gutenberg, and other content. Tanzania is suffering from a book famine and severe shortage of teachers so RACHEL fills a vital educational need.

This program is a collaboration with the local communities and the Tanzanian national government. The schools supplied the rooms for the computer labs, the tables and chairs, and they have agreed to continue the employment of at least one trainer for one year, after the initial three months of training. The Karatu District Council provided a four-wheel drive vehicle with driver to transport our equipment and staff to and from the schools for the installations, and the Tanzanian Rural Energy Agency helped fund the project.

The installations were managed by Albin Mathias, Powering Potential’s Country Director with assistance from Elibariki Magnus, our Karatu Representative.

After the installations Janice Lathen, the Founding Executive Director of Powering Potential, traveled from New York to the Karatu District to inspect the program. She was joined by Mr. Theo Mlaki, who until his recent retirement, served for 20 years as the Director of Information for the Tanzanian Commission for Science and Technology. He now deploys IBM consultants to Tanzania in his position as advisor to the Digital Opportunities Trust. They were both extremely impressed with what they saw.

Below are photos of the installation and the inspection at Baray school. Baray is in a very rural area, 65km (40 miles) from Karatu town over rocky, dirt roads and takes about 1 1/2 hours to get there.

There is also a photo of the celebration which the school hosted at the end of the installation to thank Albin Mathias and Elibariki Magnus for their new computer lab. Elibariki is a graduate of Baray school so it was an especially poignant experience for him to return to his alma mater to bring an Educating-Through-Technology program. 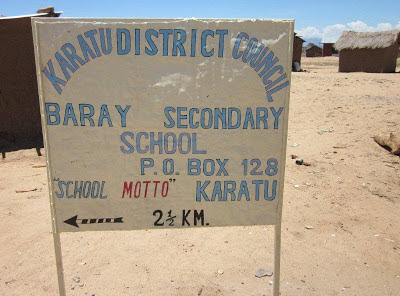 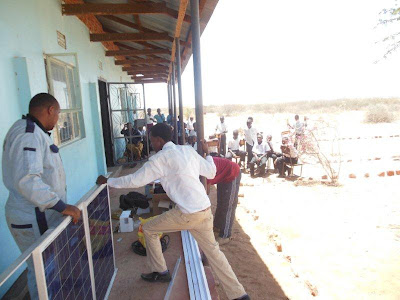 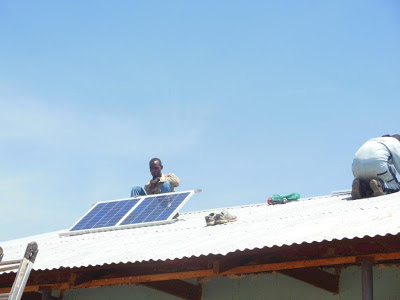 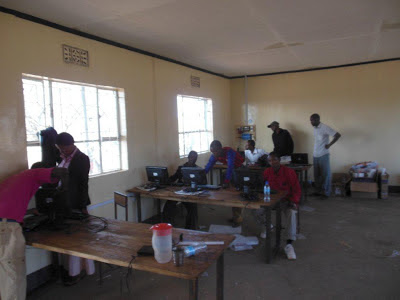 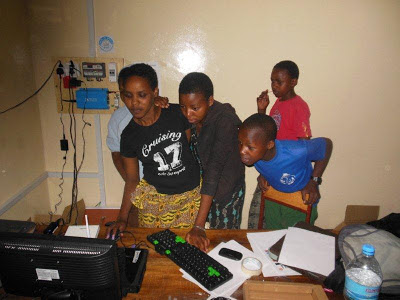 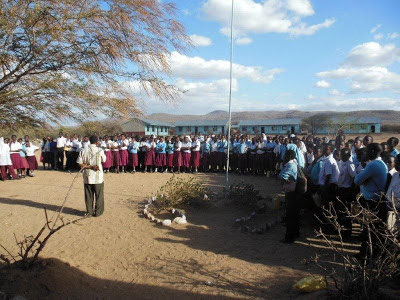 Below is a photo of Albin, our Country Director, briefing Mr. Mlaki on the technology. We use 15 watt computers with open source (free) software running on DC (direct current) electricity provided by solar power. We also install equipment to access the Internet through cellphone signals although the signals are sometimes too weak to get connected in these rural areas. We are working to find a way to boost the strength of the signals. 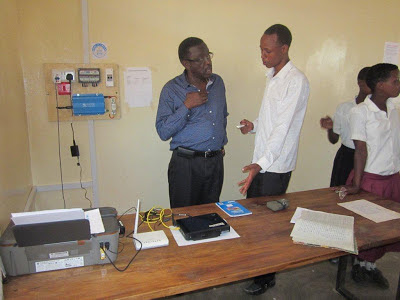 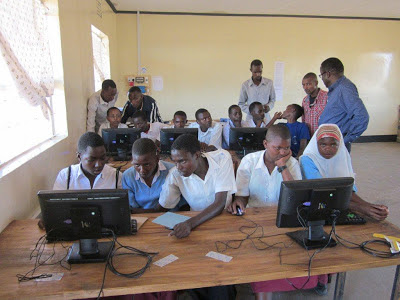 This implementation was Phase 1 of our two phase Educating-Through-Technology program. Powering Potential has completed Phase 1 at five schools and Phase 1 and 2 at an additional school.

We are currently raising funds to implement Phase 2 at Welwel and Florian schools in February/March of 2013. Phase 2 is the addition of 15 more computers at each school. After Phase 2 is completed the schools can offer the Tanzanian national curriculum of Information and Computer Studies courses to its students.

Would you like to open up the modern world to eager students who lack adequate books and teachers? If so, donation information.