Fundi is a Swahili word for “skilled person.” I’ve worked with the bike fundi, the solar fundi, and Surya likes to joke that he is the computer fundi.

This is Ramadhandi in action,
the satellite fundi.

I wish you all could see the excitement that the Intaneti is generating at the school and in the community! 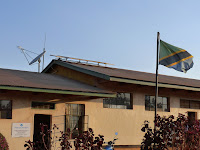 A rare sight at a secondary school in Tanzania.

They are talking to Anand Sethupathy in New York city, the Powering Potential advisor and donor whose idea it was to bring Internet access to the students at Banjika and whose money paid for the equipment and monthly service. 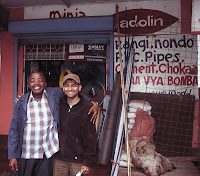 Surya (right) and Mr. Minja,
our Go To Guy in Karatu for all hardware needs.

Mr. Minja met Surya and his wife in Oct. 2008 while they were spending their honeymoon teaching at Banjika.

They had a very happy reunion in front of Mr. Minja’s store.