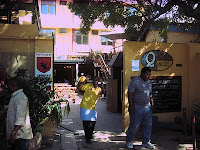 When I was searching for a place to stay in Dar es Salaam I depended on the Lonely Planet guidebook. The Q Bar and Guest House: “Huge, spotless mid-range rooms. Food is served downstairs and there’s also a popular bar with live music on Friday evening.” It’s going to be noisy I said to myself…I checked out their website and emailed back and forth…was reassured that they had quiet rooms on the top floors in the back…$55/night. OK….I knew it was in a safe, pleasant neighborhood so I booked it.

When I got there at midnight on Tuesday night…it looked nothing like their website…oh well….the room was big and spotless. The next night…the bar was full of people….and the women were dressed like no other women I’ve ever seen before in Tanzania…..my first thought: “I guess this is the way Tanzanian women dress in the big city” then I quickly realized…. noooo….they were dressed that way to improve their economic prospects 🙂

I was focused on meetings at the Embassy, the Ministry of Education, with Accenture, NGOs, company CEOs, technicians, etc. too busy to even think about trying to find another place to stay. Ohhh and by the way…the music was not just Fridays, also Wednesdays, Thursdays, Saturdays and Sundays. And to top it off…the rooms in the back which were supposed to be quiet were facing the newly opened Maisha Club….a nightclub with blaring music until 5am except Mondays and Tuesdays.

I met some interesting people there….an American who owns mines in the Congo, China and other places around the world…an Australian who explores for oil in Mogadishu, has a home in Tanzania and lives in Thailand…two medical students from Holland. There were upsides to the situation I found myself in and the laundry was free 🙂 Some of these people had stayed at the Q Bar many times over the years. I asked around, “Have you ever had anything stolen?” No was the answer….the noise was getting to me though and the Ladies of the Night were making friends with me.

I started asking around for other places in the area to stay. Then on Sunday, Hilda, another Q Bar guest had money stolen from her room. I stepped up my efforts to find another place. And yesterday evening as Lance (the Australian) and I were walking to the Italian restaurant three blocks away, a car drove up beside us and suddenly the shoulder strap on my purse was cut and it was being pulled away…a tug of war ensued and I lost. Gone…my cellphone, three credit cards, two ATM cards, my favorite purse, but only $35. My passport and the rest of my cash were safely hidden away.

So….I’ve moved. I’m paying more than twice what I was at the Q Bar and I feel infinitely more safe and comfortable.

Ministry of Education and Vocational Training