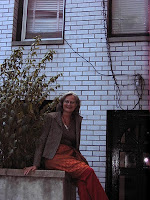 In Swahili there is: mji (town), kijiji (village), and porini (bush).

The Monduli school was definitely in the porini. I’m now in Dar es Salaam – mji mkubwa (big town). I arrived yesterday – back from the bush – and am leaving for the airport in 1/2 hour to return to New York.

I had two meetings in Dar today, one with our new-found solar expert and one at the US Embassy again.

It’s been a most fruitful time here in Tanzania and I’m returning home eager to raise money and add 15 computers at Banjika. In my meeting with the Karatu District Education Officer he agreed to assign a computer teacher to the school, which is a huge step forward, and if they get more computers they can apply to the Ministry of Education to offer Computer Studies as part of their curriculum. We would like to give the headmaster his own computer, put one computer in the teachers’ staff room, and have 20 computers for the students.

I spoke to Sirili today, a Banjika Form Four student, and he was SO excited because he had been using the Internet at school yesterday. We also found some fantastic educational material which includes the Khan Academy learning videos – Bill Gates uses them to teach his children – the material is stored locally on the server at the school so it will be easy for them to access.

Time to leave for the airport…..I’ll be home the afternoon of Oct. 6. Thank you all for your interest in the story of Powering Potential  🙂

Two and a half hours!

That’s all the time it took to install four computers at the Noonkodin School for Maasai students in the Monduli district on Saturday, Oct. 2.

I had a great team of Tanzanian professionals working with me and as per my request they all arrived at the E’Manyatta Lodge in Monduli town at 9am sharp.

Do you know how rare that is in Tanzania?…where people don’t “go with time.” I was so happily surprised. So at 9am we started the trek up the mountain,across the plains, into the valley, along winding roads, well not roads really, more like trails and 45 minutes later arrived at a school in the middle of nowhere. Hilary, our hardware expert, remarked “You like to work in rural areas!”

After we arrived, the headmaster asked me to address the boarding students who were assembled to greet us and then we went to work. The solar fundi (skilled person) wired up the computers.

Albin and the computer fundis unpacked the equipment, assembled the computers, installed the software, connected the wireless router and printer, made a few changes to the settings and we were done. We also tested a solution to give them affordable Internet access and it worked. So when they are ready they can get up online.

The headmaster, teachers and students are SO excited to have computers, especially shiny new modern ones!Tomorrow, Monday, Albin begins a one-week training course for the teachers. This has been made possible by the contributions of the generous Patrons of Powering Potential!